Lead Academy was founded with the goal of helping every student succeed, regardless of background or circumstance. Studies overwhelmingly show that music education creates growth in other subject areas. During the second year of the school's existence, the Band program was added as a way to support academic growth and build community. Under the direction of Mr. Lee Scott, the Band program has flourished and now includes a Beginning Band, Concert Band and Honor Band.

During the 2015-16 school year, several students were selected for chairs in the Greenville County Band and the South Carolina Band Director's Association's (SCBDA) Region Band. That same year, the Honor Band was awarded an Excellent rating at the SCBDA's Concert Performance Assessment. In 2016-17, the Honor Band received the highest rating of Superior at the same event. In 2017-18 and 2018-19, Lead Academy students were once again selected for chairs in both County Band and Region Band.

The Band program begins in 4th grade and consists of woodwinds, brass and percussion instruments. We strive to nurture disciplined musicians who perform their best while developing a sense of teamwork among band members. 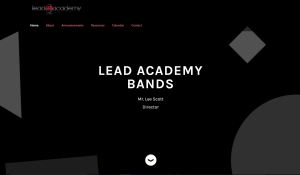